Below is an article that I wrote for the Villages of Mt Hood about my friend Bill White.

I’ve known Bill for quite some time now and have gotten to know him quite well. He and I both have many common interests, mostly the love of local Mount Hood history. This is the second article the I’ve written for this webzine. I do hope to write more.

Humans have been interested in preserving their legacy since the dawn of time, and that want for the preservation of their legacy may have been a major reason for the development of written language. In recording history, a first hand account is always the best source. Most of those that hold the historically valuable information are our senior citizens, many of which discount their role in the stories, thus keeping the story from being told.

That’s where the next generation must assume the responsibility of searching out these people and begging such stories to be told. In my research of our local history, I have become acquainted with a long time Brightwood resident that has had the foresight to recognize his role as a record keeper of our local Mt Hood History. He has been fortunate enough to have the opportunity to become close to, and visit with many local legends that are no longer around The Mountain. 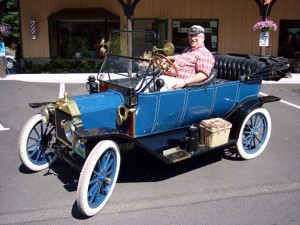 William H White, “Bill”, and his family have owned a home in Brightwood for almost 40 years. His interest in local history was keen while Jenny Welch, who was married to Billy Welch, whose family the village of Welches was named for, was still spry. He was able to get to know Arlie Mitchell, who was the last tollgate keeper at the Rhododendron tollgate of the old Barlow Road as well as folks like Harry Abernathy, who when he and “his bride” first came to Welches, camped out at the spot that the Hoodland Shopping Center sits today. As past president of the Friends of Timberline, among other civic activities that he’s been involved with, he has been in association with many other notable figures who have shared their memories with him.

Bill has kept all of this information handy for historical work involving many projects and events. The Mt Hood area’s history has found a bridge in Bill White, a bridge between the generation that settled the Villages of Mt Hood, and those of us who enjoy learning as a benefit of the fruits of their labor.

Bill and his wife Barbara, are retired now and live in Brightwood full time. Bill spends much of his time sorting and filing the historical information that he has collected through the years. Bill won’t accept it, but he really is the Villages of Mt Hood Official Historian, and we owe him a debt of gratitude.