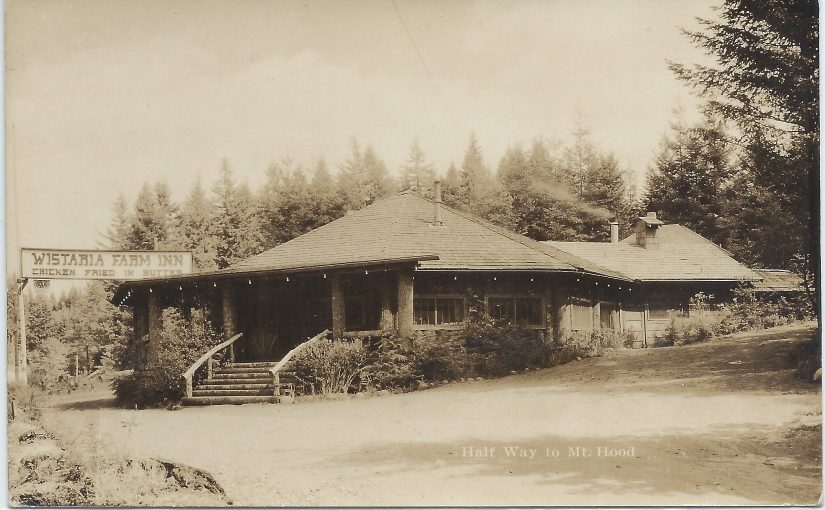 Roadhouses on The Mt Hood Loop – The Wistaria Farm Inn

The roadhouses would typically provide hot meals such as “Chicken Fried in Butter”, as indicated by the old Wisteria Farm Inn sign. Some of the old inns also had lodging for those wanting to spend the night. Lodges such as Billy Welch’s Ranch and the old Rhododendron Inn had wall tents erected to meet the need  for lodging.

The Wistaria Farm Inn was one that provided meals but no lodging. The inn was peculiar in its construction as the building was constructed from logs as an octagon. It had kitchen facilities in an addon to the back of the inn with a large open dining room at the main part of the building.

Earl C. Frost was a photographer in Spokane until 1912 when he moved to Seaside, Oregon where he and his father started a photography business. In 1917 he enlisted in the 3rd Oregon Infantry as a cook. He was sent overseas and worked as  mess sergeant during his enlistment until he was discharged in 1919 where he returned to Spokane but ended up taking his family to Portland where, in time he entered into the poultry and hatchery business.

In 1926 he moved to an 86 acre farm 30 miles east of Portland on the Mount Hood Scenic Highway where he worked in the poultry business. In 1929 he built a unique log inn and named it the “Wistaria Farm Inn”. His restaurant became known statewide for its “Chicken Fried in Butter”.

In time the roadhouses fell from popularity due to the improvement of the highway and the increased highway speeds. Folks were able to make the loop in a day. The Frost family closed the doors of the inn in the fall of 1933 and moved to Los Angeles. As the old inns closed their doors, many of them were converted into homes, which is the case of the old Wisteria Farm Inn. The old lodge still exists but today is a private residence.

I have had the opportunity to tour the old lodge, thanks to the present owners. The large dining area has been divided into separate rooms, but the old building still maintains its original character.

Mt. Hood, Oregon | Things to do near Mt. Hood, OR
Mt. Hood’s perpetually snowy peak — crowned by eleven glaciers, one for every thousand feet it rises above sea level — can be seen from miles and miles awa.

4 thoughts on “The Wistaria Farm Inn”