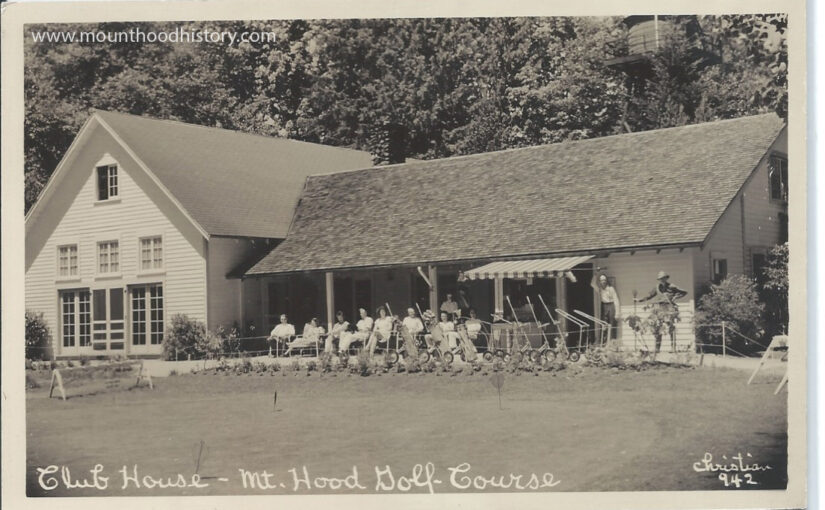 The Mt Hood Golf Course – Nestled deep within the Salmon River Valley in the foothills of Mount Hood is situated one of Oregon first and most beautiful golf courses. Today it includes a resort with all of the luxuries and amenities needed for a restful and enjoyable day on the links or for an extended vacation and base for day trips to the iconic Mount Hood territory.

In 1928 Ralph Shattuck and George Waale envisioned a golf course in Billy Welch’s pasture. The original name was “The Mt Hood Golf Course”. They leased the land from Billy with an option to buy, where they built the first nine holes and made Welches the first Oregon golf resort. Today these first nine holes, named “The Original Nine”, are known as “Pinecone”. Shattuck and Waale operated the course until 1939, when Billy and Jennie Welch took back the land and the course. Billy Welch died in 1942, leaving Jennie to operate the business.

In 1973 American Guaranty purchased land across the road from the course where they built a conference center, restaurant and additional rooms for lodging. In 1979 they bought out Bowman and consolidated the two businesses and named the operation “Rippling River Resort”. A third nine holes were added which was named “The Red Side” but is known today as “Foxglove” which, at the time, made the course the only 27 hole course in Oregon.

Ed and Janice Hopper bought the resort in 1989 and changed the name to “The Resort at The Mountain”. Ed Hopper had Scottish ancestry and introduced a Scottish theme throughout the resort. The Hoppers operated the resort until 2007 where it has gone through several owners and is now named the “Mt Hood Resort”.

The photos included with this story are all real photo postcards of the resort circa ~1950-1960 and are a part of my personal collection.

Mt. Hood Golf | Golf | Mt. Hood Oregon Resort
Pinecone was established in 1928 and is often referred to as the “Original Nine.” This scenic course offers 360-degree views of the cascading hills of the Mount …