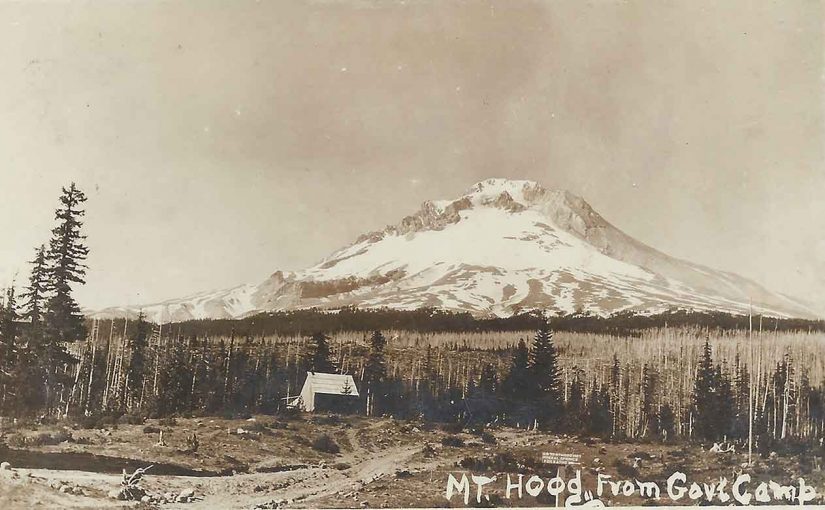 Oliver C. Yocum, Mount Hood Photographer – I love Mount Hood, history and photography, and when I can bring all three together in one place I’m happy. Loyal readers of my blog may remember the article that I wrote about Jennie Welch and her photography and its importance to the history of Welches and the Mount Hood area. Before Jennie Welch took her first photo another Mount Hood icon, Oliver C. Yocum, was bringing cutting edge photography technology that would eventually allow consumers, such as Jennie, an easier method to create their own photos to the Pacific Northwest.

Oliver C. Yocum, known to everyone as “OC”, came to Oregon in a wagon on the old Oregon Trail as a five year old child with his parents in 1847 and by the time that his life ended became a legend indelibly etched into the history of Mount Hood. His family settled in Yamhill County where he spent his childhood working on the family farm and odd jobs in between. By the time he was 17 he had worked as a clerk in the family hotel in Lafayette, was an apprentice saddlemaker, a builder and in his spare time studied law. In time he struck out on his own. He loved Shakespearean novels and travelled mining camps with a troupe reenacting the plays on a portable stage for the miners.

He eventually made it back to Lafayette where he met Ann Robertson, herself an Oregon Trail immigrant who travelled to Oregon as a two year old, and they were married. OC did some building, cabinet making and grain buying before the couple moved to Portland in 1881 where OC became a photograph printer and eventually a professional photographer.

Photography, back in the old days, was a messy and complicated procedure. It required a glass photo plate to be prepared with chemicals, exposed and developed all within a 15 minute period of time and required a portable darkroom in the form of a tent if you were taking photos in the outdoors. This form of photography was called wet plate photography. But in 1871 a process called dry plate was invented and by 1879 factories were being made to manufacture glass dry plates. Oliver Yocum was the first person in Oregon and, perhaps, the Pacific Northwest to manufacture dry plates. Dry plates were portable and able to expose the photo quicker allowing for hand held photos and were able to be stored for a time after the photo was made before it needed to be developed. This allowed more people to be able to enjoy photography and even though the cameras were still rather bulky, they allowed folks to carry their cameras into the outdoors.

For several seasons Yocum did photography in Portland during the Winter and came to Government Camp in the Summer. He took every opportunity to climb the mountain. In 1887 he was a member of the party that illuminated the summit and was one of the founding members of the Portland climbing club, the Mazamas, in 1894. He guided people to the top of Mount Hood until he turned 67 years old.

In his quest to spend time outdoors in clean air, due to “pulmonary problems” caused by smoky air in Portland, and no doubt the chemicals from the photography process, he changed his occupation to surveyor and in 1890 Yocum moved to Mount Hood, homesteaded, operated a sawmill and started guiding people to the top of Mount Hood. In 1900 he built the first hotel in the town that was named Government Camp.

Oliver lived on Mount Hood until 1911 when he sold most of his holdings in Government Camp and moved back to Portland where he decided to study dentistry and accepted a position at the North Pacific Dental College. He was 69 years old at that point and had sold most of the business to the soon to become legendary Lige Coalman, including the hotel.

OC lived a long and varied life and will forever be associated with the history of Mount Hood, but will also be a part of Mount Hood’s photographic history. OC died in 1928 and was followed into eternity by his wife Ann two years later.  Although his legacy rarely mentions his contributions to photography, his name will be preserved in some of the geographic locations on and around Mount Hood. Yocum Ridge, a very challenging ridge on the southeastern side of the mountain was named for him as well as the picturesque waterfall on Camp Creek, Yocum Falls.