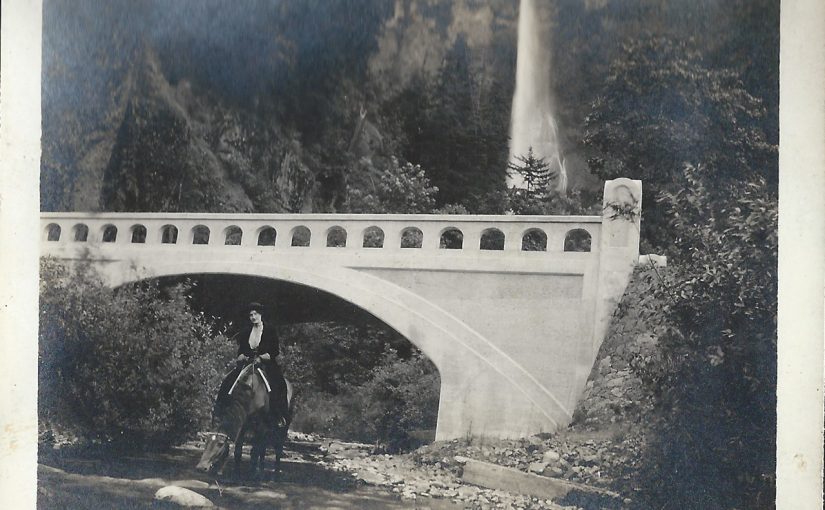 A Day on Historic Columbia River Highway when it was new.

It was 1915 and a lot was going on just east of Troutdale Oregon in the beautiful Columbia River Gorge. Planning was taking place for the construction of the now Historic Columbia River Highway.

The Columbia River Gorge back then had only limited ways of accessing it. Traditionally excursions from Portland on steam powered sternwheeler paddle boats were the way that most transportation took place. In time the railroads were built, primarily for trade but in time passenger trains started taking people there on day trips. Tourist excursions to the waterfalls on the south side of the river were common. Locations such as Multnomah Falls were the main attractions.

Of course many people rode horses or travelled in horse drawn wagons back then but with the advent of automobiles the old primitive roads were improved and new roads were made but they were still dirt wagon roads. Not long after the idea to create one of the first paved scenic automobile roads in America was imagined by several prominent Portland businessmen. Thus was created the Scenic Columbia River Highway.

Although a cultural treasure today, not all who lived in the area back then supported this idea. Many people still used horses and automobiles were owned by the wealthy. Many people back then never thought that they would ever own a car let alone use one to tour the Columbia River Gorge. Public support for financing the highway was tenuous at best.

As we all know, the highway was built and within a couple of decades was being used heavily for transporting cars from central Oregon to the Willamette Valley. Heavy trucks had been developed to carry commodities and products and most everyone had a car in their garage. It didn’t take long to see how those who imagined the highway were visionaries. The highway was quickly becoming overused and plans for a riverside highway, which would become Highway 84, was in the works.

And so back in 1915 the Historic Columbia River Highway was in construction. It would be dedicated a couple years later in 1917, but that didn’t keep people from going out to explore the modern engineering marvel. Of course traffic was minimal back then. Today we can only imagine a peaceful horseback ride along it’s path to familiar waterfalls along the way, but that’s just what this couple did.

Harry and Alvida Calvert decided to take a trip out to survey the progress on the new highway via horseback. Harry Calvert was a photographer from Oregon City, Oregon.

These photos are some of his personal photos. Snapshots into his and his wife Alvida’s life. In these photos you can see familiar places along the Historic Columbia River Highway such as Crown Point, Latourell including the falls and the old arched footbridge that was removed due to obstruction of trucks that needed to pass as well as the recently constructed highway bridge. Other locations include Bishops Cap and the Sheppards Dell Bridge, as well as Multnomah Falls. Alvida and Harry take turns posing in the photos with their horse Pat, including one where one of them made their way to the Simon Benson bridge between the upper and lower tier of Multnomah Falls.

Needless to say a horse ride on the old Historic Columbia River Highway is totally impractical today, but there once was a time. I’m certainly glad that Harry and Alvida took the time to document their day in the Scenic Columbia River Gorge.