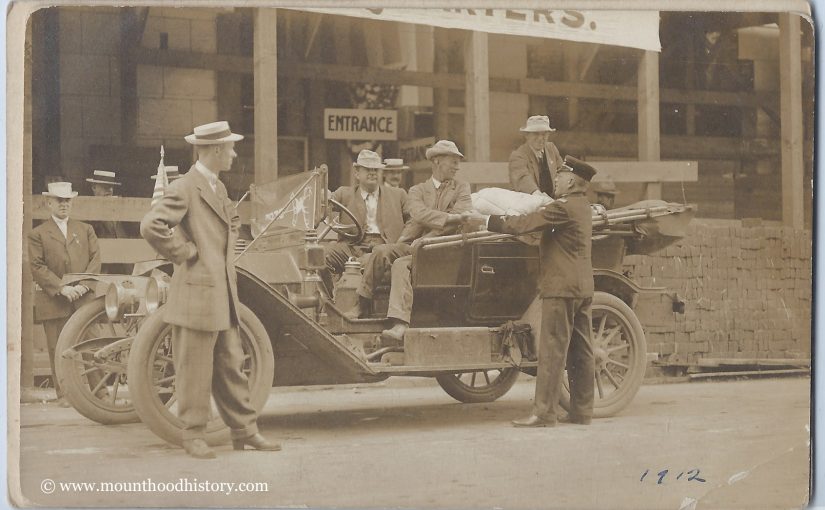 This is a great story that conveys the challenges of travelling from California to Portland Oregon in an automobile in 1912. Along the way the travelers were mired in mud, forded a river, were blocked by fallen trees and endured snow and ice. All while camping along the way, in their hats and suits.

In this modern day and age we’re used to paved roads to most any destination that we might have in mind to travel to. There aren’t many people who remember the days prior to the coast to coast interstate system that was built in the 1950’s these days let alone the old days of rural dirt roads or horse trails.

In 1912 many of the larger cities had started to pave their streets but once you left the city you were most likely sharing a dirt road with a horse and wagon. At that time not many people beyond the affluent had an automobile, and not many of them took their cars outside of the city in which they lived.

The automobiles of 1912 were quite primitive and troublesome and weren’t relied upon for long distance travel. Automobiles had been around for a couple of decades but were rare. The Ford Model T had only been built for three years and had yet to catch fire completely with the working man.

The concept of an interstate road or a maintained highway had not quite been thought necessary.  The cities had yet to be connected essentially. Loading up your wagon, hitching up the horse and travelling from Los Angeles to Portland was not so common. Most folks took a stage, ship or, in most cases, a train.

In 1912 Portland Oregon hosted the Elks Club National Convention. Back then it was a big deal. Portland businesses came together with activities and events to entertain the attendees. People from all over the country came to Portland to attend, most all using conventional and practical transportation, but there were others who decided to take their own road and their own transportation. Four men walked from Brookfield Missouri claiming a trip of over 2200 miles. It took them over three months.

At the same time three men struck out from an unknown city (Not mentioned in the notes included with the photographs) in California toward Portland Oregon in a 1912 Haynes touring car. Claiming to be the “1st men to drive from California to Portland”. Frank Morehead, Charlie McClower, John Roger Wood were off on an adventure if the photos are any evidence at all.

Although not verified that they’re the first to drive the west coast in a car, they are certainly some of the first and these photographs give an idea of what it must have been like.

I acquired the photos in an eBay auction. They came from a scrapbook in an estate sale in Michigan. I collect antique photographs so I bid on them and won the auction. The photos came with a short description but no details. There is no information that I’m able to find on the web. I thought that I would share them here.