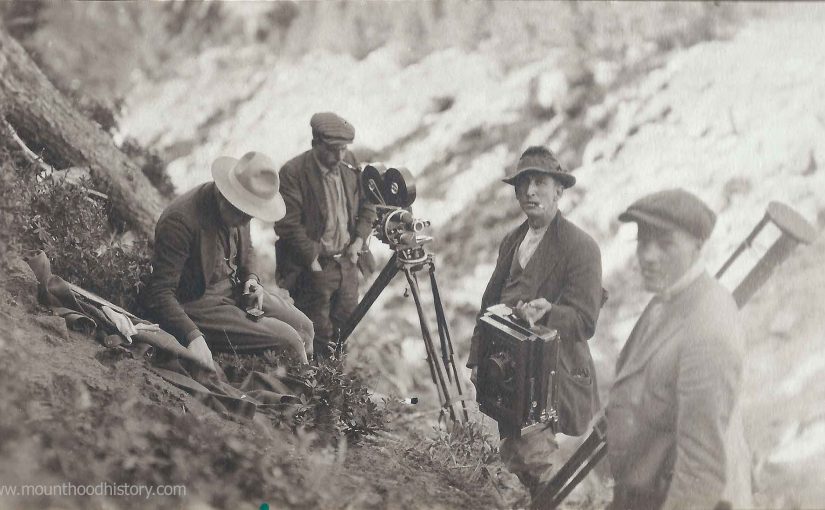 The filming of an Oregon Silent Movie on Mount Hood

I have come across an interesting series of photographs recently that document the filming of an early Oregon Silent Movie filmed on Mount Hood. The photos show a crew of photographers and actors that appear to be reenacting a mining scene. There appears to be a wooden sluice set up, men with shovels as well as a scene with men with rifles who appear to be defending their claim.

The scene that shows Government Camp gives some indication of the age of the photos. Dr Kelly’s cabin is clearly seen as well as the old Timberline Climbers Cabin which was located very near the future location of Timberline Lodge. This would place the event near what I found to be the best possible chance to be a documented filming of a movie around Mount Hood. A silent movie filmed in 1917 called “A Nugget in The Rough”.

The subject of this movie seems to be about gold miners. There seems to be a scene with gold panners with a sluice filmed on the slopes of Mount Hood. There’s also a scene where it appears that the miners are protecting their claim with rifles. After I acquired the photos I found out there were other scenes to this set that appear to have been filmed in Portland at a constructed set with a primitive town, log buildings etc. The town scenes appear to depict the activities of miners when they’re in town to spending their earnings, including saloon scenes and a group of “painted ladies”.

I thought that these photos would be great to own, but now that I have acquired them I’m a bit saddened that the group was broken up and separated. These are historically significant images depicting very early movie making in Oregon. Perhaps one of the first Oregon Silent Movie films made in Oregon.