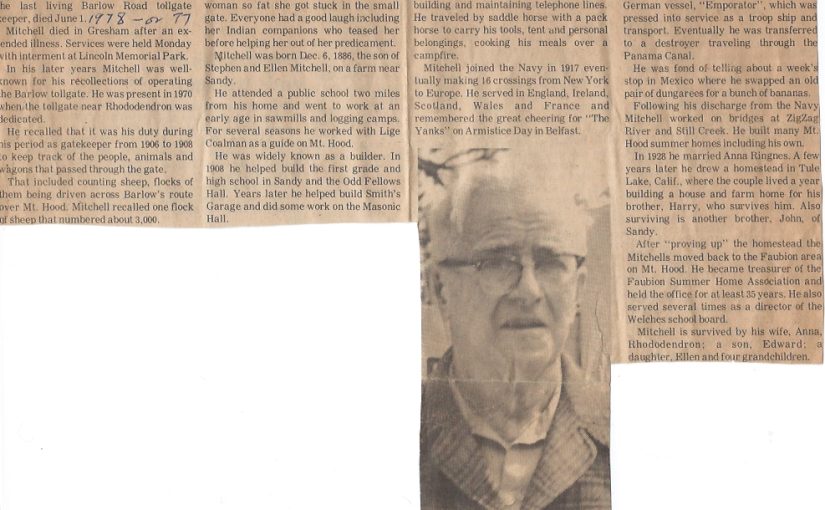 Mitchell died in Gresham after an extended illness. Services were held Monday with internment at Lincoln Memorial Park.

In his later years Mitchell was well known for his recollections of operating the Barlow tollgate. He was present in 1970 when the tollgate near Rhododendron was dedicated.

He recalled that it was his duty during his period as a gatekeeper from 1906 to 1908 to keep track of the people, animals and wagons that passed through the gate.

That included counting sheep, flocks of them brought across the Barlow’s route over Mt. Hood. Mitchell recalled one flock of sheep that numbered about 3000.

He liked to tell the story of the Indian woman so fat that she got stuck in the small gate. Everyone had a good laugh including her Indian companions who teased her before helping her out of her predicament.

Mitchell was born Dec. 6, 1886, the son of Stephen and Ellen Mitchell, on a farm near Sandy.

He attended a public school two miles from his home and went to work at an early age in sawmills and logging camps. For several seasons he worked with Lige Coalman as a guide on Mt Hood.

He was widely known as a builder. In 1908 he helped build the first grade and high school in Sandy and the Odd Fellows Hall. Years later he helped build Smith’s Garage and did some work on the Masonic Hall.

He spent four years in the Forest Service building and maintaining telephone lines. He traveled by saddle horse with a pack horse to carry his tools, tent and personal belongings, cooking his meals over a campfire.

Mitchell joined the Navy in 1917 eventually making 16 crossings from New York to Europe. He served in England, Ireland, Scotland, Wales and France and remembered the great cheering for “The Yanks” on Armistice Day in Belfast.

Mitchell served aboard the captured German vessel, “Emporator”, which was pressed into service as a troop ship and transport. Eventually he was transferred to a destroyer travelling through the Panama Canal.

He was fond of telling about a week’s stop in Mexico where he swapped an old pair of dungarees for a bunch of bananas.

Following his discharge. from the Navy Mitchell worked on bridges at Zigzag River znc Sill Creek. He buillt many summer homes including his own.

In 1928 he married Anna Ringness. A few years later he drew a homestead in Tule Lake, Calif., where the couple lived a year building a house and farm home for his brother, Harry, who survives him. Also surviving is another brother, John, of Sandy.

after “proving up” the homestead the Mitchells moved back to the Faubion area on Mt. Hood. He became treasurer of the Faubion Summer Home Association and held office for at least 35 years. He also served several times as a director of the Welches School Board.

Mitchell is survived by his wife, Anna, Rhododendron; a son, Edward; a daughter, Ellen and four grandchildren.