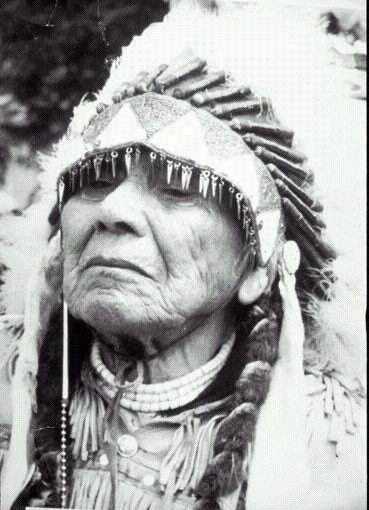 This is Chief Tommy Thompson. I don’t hear his name mentioned much these days. When my father was a boy growing up in The Dalles he was legend. He would come to the schools and give talks to the children about the local native history and heritage. He was a man who was respected by all races.

“Chief Tommy Thompson was a most exceptional human being, a cross between Jim Thorpe and the Pope. Tall, handsome, and athletic, a famed swimmer and boatman in his youth, he was married to as many as seven women at one time but never to a white woman; it would have been unthinkable. Chief Tommy Thompson was a holy man. His ancient religion was that of the Waashat, the drums.

He had begun serving as salmon chief at Celilo Village in 1875, when he was but twenty, after the death of the previous chief, his uncle Stocketly, who had been killed by friendly fire while serving as a scout for the U.S. Army. Tommy was salmon chief of Celilo Falls for the next eighty-five years, making him, without much question, the longest-serving public official in American history. Chief Tommy Thompson was also the most revered man on the river, the last true chief.

Chief Tommy was 102 years old when Celilo Falls were drowned. The death of Celilo Falls in 1957 foreshadowed the death of Chief Thompson two years later, at age 104. The River People believe he died of a broken heart. (from George Rohrbacher “Talk of the Past”)”