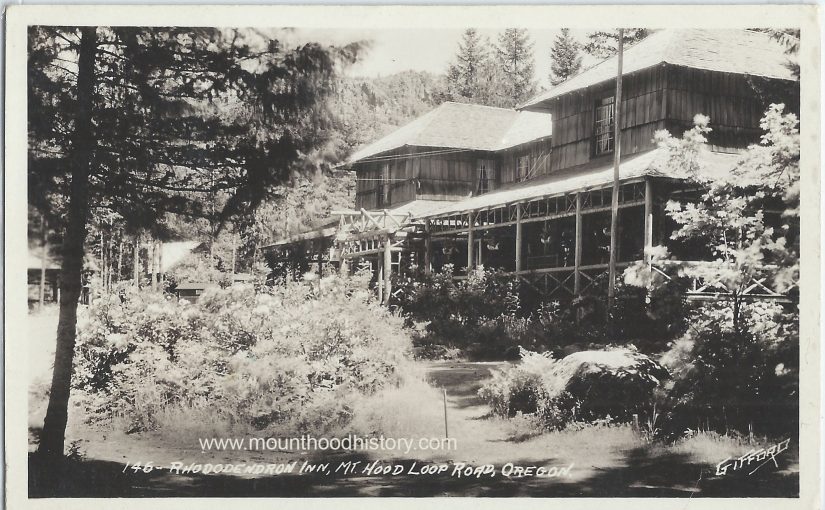 The Rhododendron Inn – In the early days in the communities on the south side of Mount Hood travelers on the old road to the mountain relied on the inns and roadhouses for a bed and a meal while they traveled through or played in the area.

The roads were primitive and the automobiles were slow. It would take the best part of a day to drive from Portland, for instance, in contrast to the hour drive that it is today. As a consequence of the time that it took to journey to Mount Hood many roadhouses, hotels and restaurants sprung up along the old road. The town of Rhododendron had the Rhododendron Inn.

Henry S. Rowe, a Mayor of Portland from  1900 to 1902, had the Rhododendron Inn in built 1905 on 160 acres of land that he owned. A Portland Fire Chief that served during Rowe’s administration by the name of Lee Holden did the construction and design.

Holden took over the hotel in 1910, and it was this season that the post office was established under the name of Rowe. The name was later changed at the request of the Post Office Department to Rhododendron in 1920.

Holden sold the hotel to Emil and Suzette Franzetti, hoteliers from Europe in 1912. The Franzetti’s added a 60’x100’ dance hall, a 50’x100’ concrete swimming pool, tennis and croquet courts, bridle paths and hiking trails. They also added an annex across the road as well as several cottages and tent houses scattered through camp areas in the woods surrounding the inn.

In 1916 Emil was killed when his car rolled in soft sand near the Zigzag Ranger Station. Mrs. Franzetti ran the hotel for seven years after that and finally sold the inn and 20 acres around 1924 to William Cash and his wife while the rest of the land was subdivided into lots, many containing Henry Steiner built log cabins. The annex burned down in 1932. The hotel was sold in 1943 (?) to Thomas Rex who changed the name to the Rex Inn. During a very cold snap in the Winter of 1949 the inn caught fire, supposedly from a blow torch being used to thaw pipes.

The location of where the Rhododendron Inn once sat is on the south side of today’s Highway near where the pedestrian suspension bridge over the Zigzag River is located on the west side of town. All traces are lost today with no hint of its existence.